Cervical screening (whakamātautau waha kōpū) can be an uncomfortable process for anyone - but for people who have faced sexual harm, it can be
profoundly traumatising. Talk Peach and Brave have developed this guide to help people understand exactly what the process involves, what may be uncomfortable or triggering, and how to ensure a safe environment for your cervical screening.

We’ve also designed a form you can take to your screening appointment with some of the things you can tell your healthcare professional so that they can better support you. 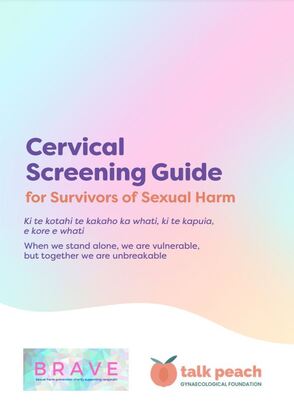 Template to take to screening appointment: 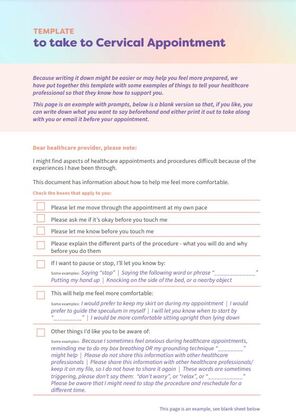 ​We are grateful to have the support from Rape Prevention Education to provide you with the latest statistics and other information about sexual harm in Aotearoa.
Due to its hidden nature, it can be difficult to gather an accurate picture of the problem of sexual violence as it is often not reported, which means that statistics may fail to reflect the problem in full. There have been many research projects in Aotearoa New Zealand which show a high prevalence of sexual violence in our communities.
​
Research on sexual violence and its prevalence suggests that:

What is sexual harm?

What is rape and sexual violation?

(The information below is not intended as legal advice.) Sexual Violation is legislated in the Crimes Act 1961, Section 128. This legislation protects everyone in New Zealand against Sexual Violation (which includes rape and unlawful sexual connection) as well as other forms of sexual abuse.

Rape is defined in the Crimes Act 1961 as:
“Person A rapes person B if person A has sexual connection with person B, effected by the penetration of person B’s genitalia by person A’s penis,-
(a) without person B’s consent to the connection; and
(b) without believing on reasonable grounds that person B consents to the connection.”
​
This means that rape is defined as sexual intercourse without consent, although the slightest penetration is enough. Due to a penis and genitalia needing to be involved – rape is primarily aimed at being between a male and female, but also includes those surgically altered.

What are the types of sexual violence?

Sexual violation occurs in many contexts. Find out more about date rape, drug rape, incest (family rape)or spouse/partner rape by clicking on the links. Please don’t hesitate to contact your local sexual assault support agency if you have any questions or concerns.
​​
Click here to check out pamphlets from Rape Education on drug rape, date rape, partner rape and incest.

Experiences of rape and sexual abuse can be very difficult for people to deal with. They are not usually things that people just ‘get over’ without putting effort and time into it. Instead, many people who have been raped or sexually abused consider their process of healing to be a journey.

By gaining some understanding of what happened to you and what you can do about it, you can begin your healing journey. Every person’s healing journey is individual to them. Some people choose to seek support from friends and family, some choose to tell non-abusing whānau and others choose counselling or other therapies. Some people choose different options at different stages of their lives as their relationship to the abuse changes. The key is that the healing journey you choose should be one which you feel in charge of and which suits your needs.

To find out about healing through support groups and counselling, check out our page 24/7 Support.

What does the law say about consent and sexual violence?

Consent is another term for giving permission for something to happen. You do not have to verbally protest or offer physical resistance to show that you have not consented.